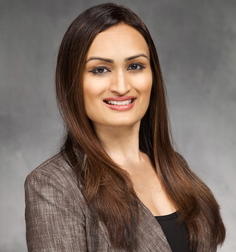 Payal is an international award-winning, multilingual communications professional with more than a decade of experience. With a knack for writing and storytelling, Payal originally set out for a career in sports broadcasting. Following a brief stint as a sports reporter in Milwaukee, she returned to her hometown of Chicago to transition to a career in public relations.

Currently at Navy Pier, Payal leads the communications efforts and serves as the primary spokesperson for the top destination in the Midwest, which welcomes nearly 9 million guests each year. She played a pivotal role in developing and executing the PR strategy for Navy Pier’s centennial celebration, which included a robust lineup of special events and programming and Pier-wide redevelopment efforts to enhance the iconic landmark as it entered its second century.

As the Director of Public Relations for the NFL Players Association (Chicago), Payal oversaw all communications on behalf of the organization, its charitable arm and the players involved. She was instrumental in creating and implementing the media strategy for the Chapter’s involvement in the NFL Draft in Chicago, the concussions lawsuit against the NFL, among other key events and initiatives led by the organization and its members.

Payal has also managed corporate communications for the Chicago Fire Soccer Club, where she led the public relations campaigns for the 2014 FIFA World Cup viewing parties in Chicago and the Fire's new primary and third kit launches. Prior to that, Payal served as the Director of Public Relations for the Chicago Soul FC, a new professional indoor soccer team.

In 2016, Payal was recognized at the National Press Club in Washington D.C. after being named to the PR News Rising Stars 30 Under 30 list, which honors budding PR leaders worldwide. She is also a recipient of the MarCom Platinum Award, Publicity Club of Chicago's Golden Trumpet Award, and Public Relations Society of America Chicago Skyline Award of Excellence.

Presently, Payal sits on the local boards for Publicity Club of Chicago (PCC) and Women In Sports and Events (WISE), and is a member of Public Relations Society of America (PRSA) and Chicago Leadership Alliance (CLA), an exclusive network of distinguished leaders in Chicago. She has also served as the host of Midwest Fashion Week and guest co-host of WCIU-TV’s morning TV show, You & Me. As part of her philanthropic involvement, she volunteers regularly at Feed My Starving Children and serves as an ambassador and charter member of Room to Read – Chicago Chapter.

Payal attended Marquette University at the age of 16 and graduated with a Bachelor of Arts in Broadcasting, Electronic Communication, Public Relations and Spanish Language and Literature. She is currently pursuing a Master of Science in Communication Leadership at Northwestern University. Additionally, Payal is certified in Crisis Management via PR News and is currently a cohort member of the Young Nonprofit Professionals Network (YNPN) Leadership Institute, a competitive certification program for rising nonprofit leaders.

In her spare time, Payal enjoys reading, working on her cookbook (benefiting Room to Read), practicing yoga and meditation, watching soccer, and spending time with family and friends. Payal currently resides in the Bridgeport neighborhood of Chicago with her goldendoodle, Leo – named after her favorite soccer player, Lionel Messi.

"Choose a job you love, and you will never have to work a day in your life."
​— Confucius